As the amount of particulate to be captured is very small and the particulate size is also likely to be limited, it is unlikely that any form of cyclonic separation will either be size selective or will be efficient enough to be of any practical use.

Purpose designed micro-cyclones could however be considered to establish particulate size distribution or to guarantee that size selection takes place.

An example of the use of a micro-cyclone is within the personnel gravimetric sampling train used to establish the extent of respirable dust ingestion on a person sampled for a period of time. In this example, the cyclone is used as a method of removing any particulate of a size in excess of that constituting respirable dust (+ about 8µm).

As with the above arrangement given as an example, it is possible to capture the total spectrum of airborne dust with the standard gravimetric dust sampling train providing that precautions are taken to negate the possibility of wind blown excessively sized particulate entering the sample – grits or sand. With this type of arrangement it is also important that the capture filter is permitted to catch the sample as evenly and uniformly as possible to prevent increases in filtering velocities or decreases in the sampling flow rate.

The illustrations – Figure A – indicate the requirement of the sampling trains for both respirable as well as the total spectrum dust capture rigs using standard gravimetric dust sampling equipment available on a mine with added precautionary requirements.

The PM10 or sub 10µm particulate capture sampling has been in general use for some time, constituting a means of sampling potentially respirable particulates on a longer term basis. The stipulation of monitoring sub 10µm particulate superseded the original primary and secondary National Air Quality Standards (NAAQS) for particulate matter (PM) which were promulgated in 1971 (EPA). The original primary standards for PM, measured as total suspended particulates or TSP, were 260-microgram µg/m3. The 24-hour average was not to be exceeded more than once per year with an annual geometric mean of 75µm/m3. The NAAQS was revised in 1987 with the following criteria changed:

TSP was replaced as an indicator that included particles with an aerodynamic diameter of less than 10µm – PM10.

The annual primary TSP standard was replaced with an annual average PM10 standard of 50µm/m3.

The secondary TSP standard was replaced with 24 hour and annual PM10 standards identical in all respects to the primary standards.

The Environmental Protection Agency (EPA) revised the primary health based PM standards by adding a new annual PM 2.5 standard set at 15µg/m3 and a new 24 hour PM 2.5 standard set at 65µg/m3 (July 1997). The PM10 standards were not changed.Analysis from monitoring in the United States as well as locally indicates that fugitive dust constitutes about 90% of the PM10 emissions but as most monitoring is undertaken by industry there is some loading of the fugitive dust fraction due to the higher incidence of dust creation from process requirements and materials or ore handling. Only a very small percentage of this particulate manifests as very fine particulate, which led to the requirement for PM2.5 monitoring for fume and smoke particulate capture.

As already implied above, there was a necessity to scrutinise specific health issues of respirable dusts and fume and the PM 2.5 system was devised.

Of concern in the establishment of both PM 10 and PM 2.5 programmes, especially the latter, there is a degree of doubt as to the accuracy of the available equipment, equating the means of air ingestion physiologically with that of the monitor unit.

Much research went into building pumps and monitoring rigs for PM 10 including aspiration rates, while the 2.5 µm filter was achieved using an 0.45µm membrane filter in addition to the 8.0 µm filter capturing the <10µm >8 particulate. The primary induced air was selected to contain only 10µm particulate with approved design impinger or cyclones.

Monitoring using the PM 10 and PM 2.5 methods utilises 24 hour sampling on each third consecutive day in order to achieve a form of statistical acceptance. The labour intensive nature of undertaking this operation together with the fact that continuous monitoring is not undertaken as well as the high cost factor leads to an unwieldy expensive system.

At least one South African manufactured unit is available to compete against imported models. 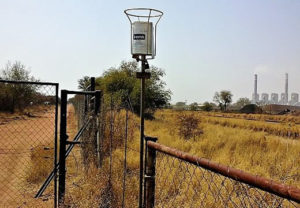